With Dr. Larry in Timor Timur, the next step of my training process began. I was to lead the installation of the final 3 stations: One in western Flores and two in Western Timor (Timor Barat). All along I’ve been going through the process of transforming from a helper caterpillar to a true field monarch butterfly and these final installs are kind of like the de facto final exam in Dr. Larry’s school of hard knocks. I’ve been groomed for success and that is precisely what I intend to reap but I'm coming to learn that the captain’s seat can certainly be a stressful one at times. Nevertheless, I’m excited and I know I’m prepared. There is no classroom in which I could have learned what I have here and no textbook capable of forming me the way this experience has. True field-seismology savvy is hewn from the terrain it aims to probe. I know Leland (and Meghan) will laugh when reading this, but being in the position I’m in now means a lot to me. Now to the action part! 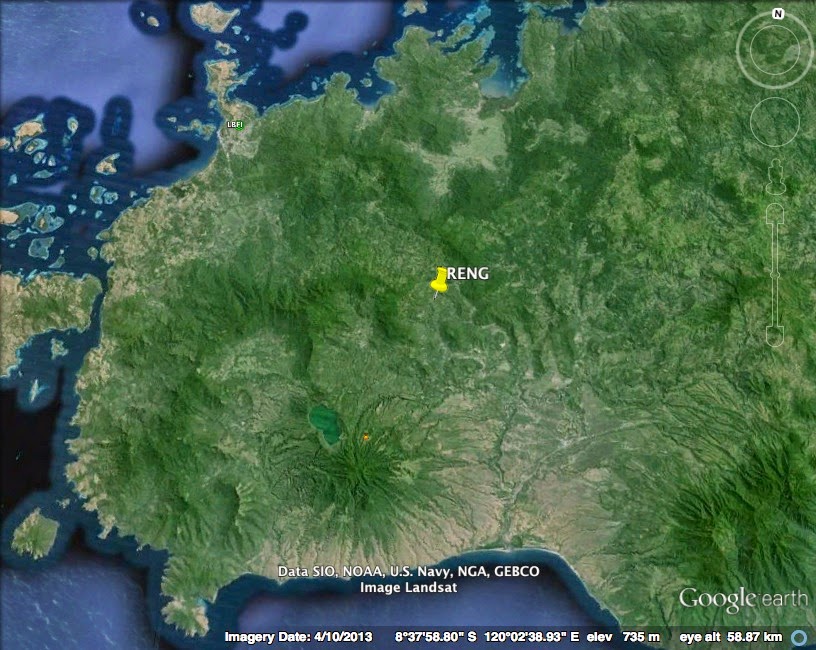 A snapshot of western Flores with a pin dropped on the station we installed. Note the giant basin to the south-southeast of the pin - something we purposefully avoided.
Nova and I flew to Labuan Bajo to install a final station in western Flores to compliment the station we built in Pagal and the Indonesian station in Labuan Bajo itself, which is conveniently located about a stone’s throw from the local airport... We brought a BMKG (department of meteorology, climatology and geophysics) staff member with us to give him a taste of our trade and he wound up being one of the most helpful and promising scientists and friends we’ve met this whole trip. His name is Ricky Man and I’ll brag about him shortly.

The city of Labuan Bajo is pretty touristy (not a surprise given that it’s gorgeous, near Komodo Island and is a popular dive spot) which means it's expensive and even more people offer at the top of their lungs to carry your bags for money, but we found a silver lining in a what may be NTT’s only frozen yoghurt shop.

We set off to the southeast towards some rugged topography that is presumably the result of both volcanic and back thrusting activity in the region. We met with the regional leader (the camat [pronounced “cha-mat”]) and he was so excited about our project that he gifted me a sweet hat and unofficially inducted me into his sweet hat club! I think I’m the tallest member of this chapter. 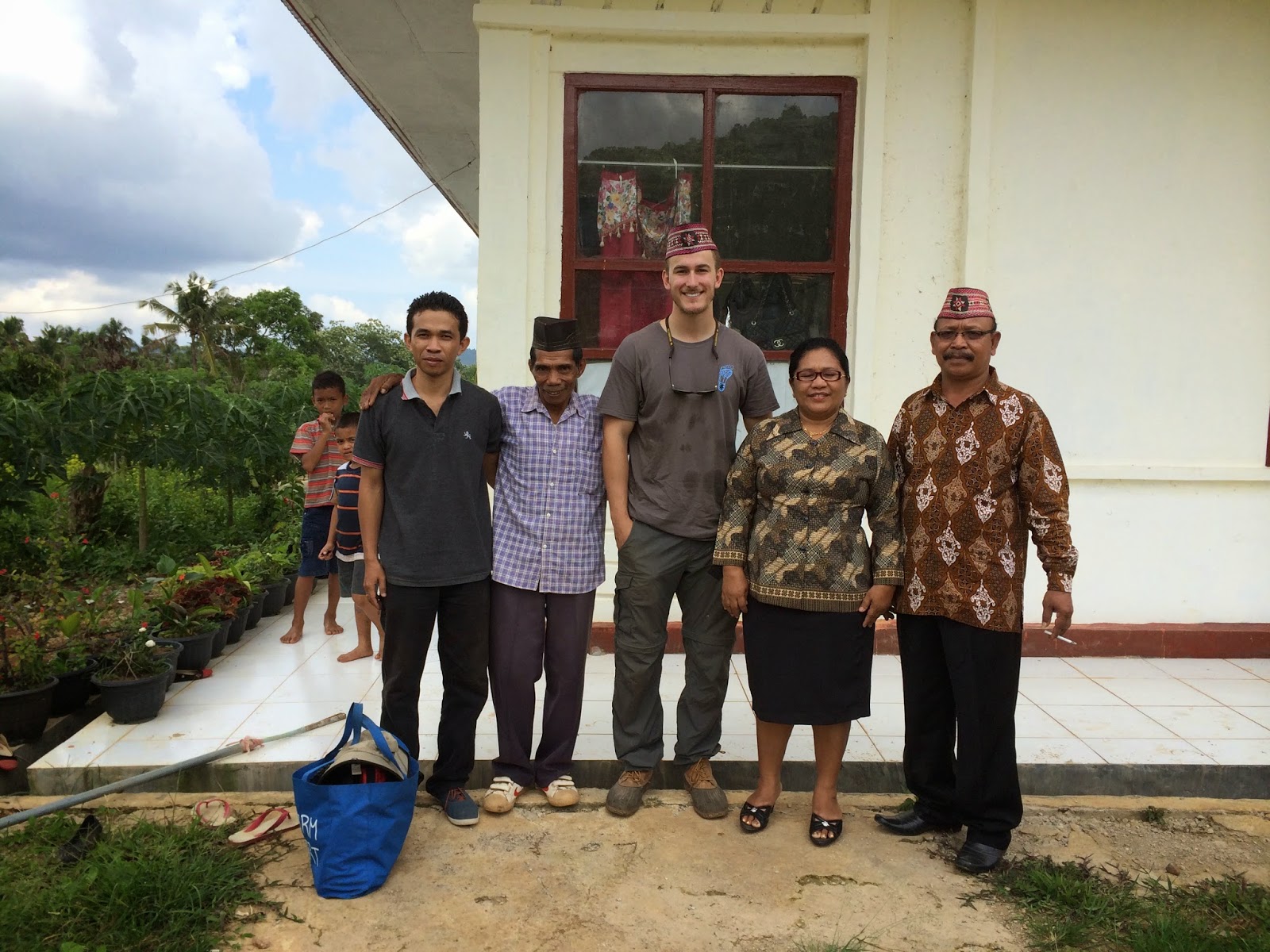 Camat 2 to my left, his wife beside him and Ricky 2 to my right. The camat's name is France Selatan, which means South France. Indonesian naming conventions are totally different from ours and this man absolutely deserves his power name.

With the help of local directions and some a priori research on Google Earth, we found the village of Rengkas, which was just about where we had hoped to put a station based on our array. With the village leader, a few good local men and 5,000 cigarettes, we began rooting around some mountainous farmland. Pretty soon the sky opened up and an impressive downpour soaked us all to the bone. Visibility went from being able to see clear across a massive valley to that same valley looking like an impressionist painting of an off-white wall. With how hot this whole field excursion has been, I thought the rain was actually really refreshing. The villagers, however, seemed less enthused and huddled under some trees, undoubtedly making fun of me and whooping with laugher every time I almost slipped, while I romped around and eventually found the site that was to host our beloved sensor. We marked the site, cleared it with the landowner, lined up a labor team for the next day and set off for Labuan Bajo for the night.

On the way back west, something happened that was so frustrating and unstoppable it was almost hilarious and definitely put lesser traffic problems in perspective. The roads are mediocre, at best, when dry. When wet, they tend to be a little softer, one might say. About 15 km from the city, we arrived at a very long line of stopped cars. We hopped out to see what the holdup was and saw this: a massive, probably overloaded, truck had turned a tight corner and half sunk into the ground adjacent the asphalt. He had done so in such a way that his truck was blocking the road from both directions. On either side of this “beached whale” was a one-lane road (two lanes when dry but the rain had really done a number on it and the road had been reduced to a thin strip of asphalt dissecting a swamp). Trucks were lined up downhill for a solid kilometer and even if you could get around the sunken giant you were pretty much stuck there because you couldn’t get around the aggravated truckers behind him. After a period of time that wound up being mercifully much shorter than my increasingly pessimistic estimates, the trucks downhill found a way to pull over so cars could pass on the shoulder and we were in a sturdy pickup (the Hilux!) so we didn’t have any issues skirting around them. We got home and we passed out.

The next day we successfully put in the station and finished about 5 minutes before an identical thunderstorm rolled in and shooed us away from the completed site. We were all pleased with the final result and I’m confident Leland would have been too. Ricky (aka Slick Rick) was tremendously helpful! He jumped at the chance to carry heavy things up steep paths, chipped in good old-fashioned physical labor, made sure to carefully observe all of my work with the technical equipment while asking genuinely good questions, and, was instrumental in winning over the locals. Ricky is from Flores and is fluent in the local dialect, which obviously helped establish some extra trust with the villagers. While I was leveling the sensor, Ricky took the time to draw time series in the dirt and explained how the sensor records waves that travel from afar, that it has three components and why it’s important for it to be precisely oriented. He’s the type of guy we want to continue to work with on this project and on future projects too. His English is good enough to read scientific papers so I’ll be sending him a number of them to discuss when I return. Here he is with the first station he’s ever helped install – it won’t be his last: 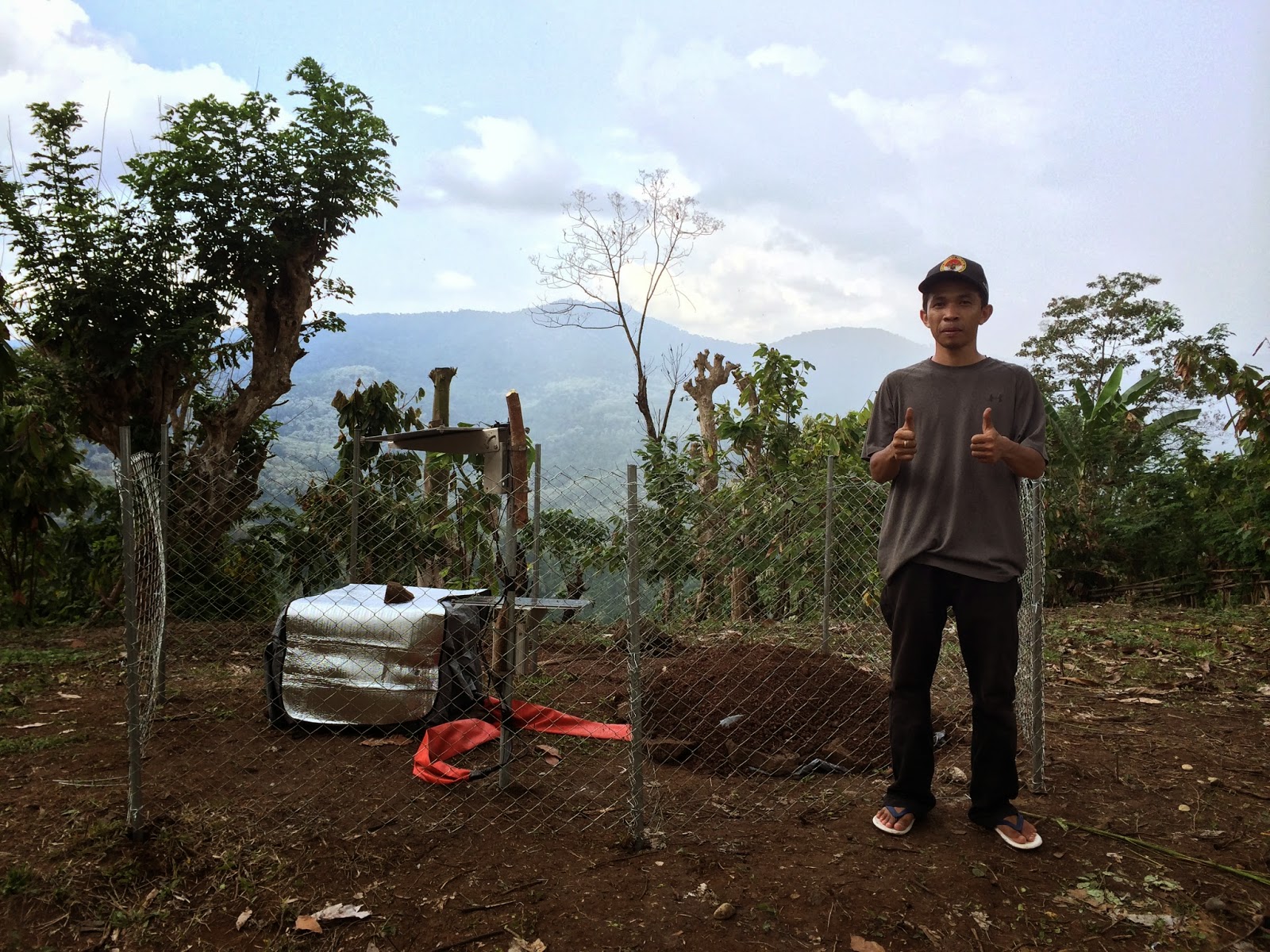 Get 'em, Rick! Also, note the scenic valley in the background. Definitely a perk.

Tomorrow: Lelogama in western Timor.
Posted by Unknown at 5:28 AM